I totally love this bikini. True to size. Beautiful material. Super flattering. Taken me so long to find a bikini that is high waisted enough to cover my stomach (since having my son) but also looks so pretty!!! Would purchase from this site again. Gorgeous packaging too. My legs look longer with it, really fits me, the cut of bottom is perfect as well. A little bit sexy and cute. Can be my surfing outfit so i’m satisfied. My legs look longer with it, really fits me, the cut of bottom is perfect as well. A little bit sexy and cute. Can be my surfing outfit as well.

I really like the one peice. I just had a baby so I did expect my chest to not fit perfectly in it but I'm hoping with in a month I can fit them in lol

Fit as expected and love how it looks. Comfortable with an adjustable front tie and side straps, enough coverage in the back. My new favorite one-piece suit. 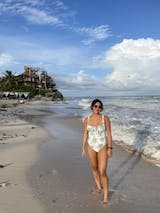 Well made swimsuit and very cute style, I would love to wear it but unfortunately the torso length is so short that I am unable to fit. I went up a size to M just to be sure it would fit and unfortunately not enough. Size guide doesn't mention length at all. B
Floral Cutout One-Piece Swimsuit Bruna Villela Leite (CA)
How did it fit? : TRUE TO SIZE
Best Swimwear Purchase EVER!

This one piece is beautiful, the fabric is so soft in swimsuit like, you can’t even tell that it’s made from recycled materials. Not only is it affordable, but I also is great for the planet and it looks amazing, truly a 10/10. The top has adjustable straps, and the cleavage area is adjustable so you can change the neckline look slightly if you wanted to. 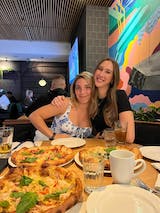 My legs look longer with it, really fits me, the cut of bottom is perfect as well. A little bit sexy and cute.

Such a cute pair of swimmers! Super affordable and sustainable so would definitely buy again. Runs slightly small, I’m usually an xs and was between sizes when ordering. I stuck to an XS and it’s a little short in the torso K
Hollow Out One-Piece Swimsuit Kait (SG)
How did it fit? : TRUE TO SIZE I love these bikinis so much I can't wait for my Bali trip in December! it's is super cute!! This dress is high quality and the fabric is so soft!! i had to steam mine because it was very wrinkled when it arrived (just from the post) - but now it seems much less wrinkle-prone! The true wrap allows to multiple styles of fit. And the color is very decadent and soft. Love it! P
V Neck Pocket Dress PHUNTSOK BHUTIA (US)
How did it fit? : TRUE TO SIZE

Just awesome quality..
Shipping is great and I luvd the product!
I look so great on it.. so sleek material.... I must say... Truly recommend this product!! I received a confirmation email of my order, an estimated 6-10 days delivery and a tracking number. However, the tracking number took me to a Chinese site, its origin, so I had no way of keeping track. After about day 12 I contacted Berlook for an update, they were very quick to respond and my bikini was now on its way back to China as I hadn’t collected it from the Post Office where it had been from day 6! I had no note through the door letting me know the delivery had been unsuccessful so no know way of knowing it was just around the corner at my local post office! Berlook apologised and sent out a new one as they said it would be quicker than redirecting the original. I feared the same thing would happen again because the tracking details led me to the same site. However, 6 days later I came home to find the bikini parcel through my letter box… why couldnt the same bikini fit through my letter box two weeks earlier?! So much pmore hassle that could have been avoided. Lovely bikini, Berlook has a fantastic customer service team but absolutely let down by poor courier. `
One Shoulder Cutout One-Piece Swimsuit `Hila Eyal (IL)
How did it fit? : TRUE TO SIZE The swimsuit material is thick, feels good on the body and is obviously well made. The ties at the back make it easy to adjust how tight/covered you want it as well. Would buy from this company again.

Love the look of it, but I would recommend to size up. i’m literally in love with this set! the pattern is so gorgeous. i got so many compliments and it’s held up really well! personally, i have a pretty small torso, so i had to shorten the straps a bit but i don’t think it’ll be a problem for most people. just make sure to set the suit in vinegar so that the dye doesn’t run!